Call it the unique tale of two Hagerstowns.

The towns in Maryland and Indiana share a lot more than the same name. Both are located near Interstate 70 and the Old National Road. Both have nearby DOT Foods plants and downtowns that are in stages of rebirth. Both have storied histories in pioneering and the arts. One is near our nation’s capital and endured battles in the Revolutionary War and Civil War. One is known for its entrepreneurial spirit in the automotive, railroad and toy industries.

The Hagerstowns share a bond that literally goes back to pioneering times. “That’s how we got our name,” said Bob Warner, former city manager of Hagerstown, Ind. German settlers connected to the Hagerstown, Md., area moved west to eastern Indiana in about 1830, where they forged another Hagerstown.

It’s entirely possible that people here are closely related by blood as well as by town name. “We are connected by the very beginning,” said Brian Longbons, a councilman from Hagerstown, Ind.

He, Warner and their wives visited Hagerstown, Md., last fall to see the town up close and receive the sister-city proclamation and other welcome gifts from Mayor David S. Gysberts. The delegation from Indiana was impressed by the town and its leaders. “I was just floored by everything they did for us,” Warner said. They visited the Antietam battlefield, which was considered the bloodiest of the Civil War and led directly to President Lincoln’s Emancipation Proclamation. They saw a brand new library, a revitalized downtown and a high school that focused on the arts. A sister-city designation would certainly benefit Hagerstown, Ind., they quickly realized.

The town council has approved and it will be formalized during Jubilee Days when Mike Keifer, the father of the effort comes to town. He will tour special business, such as Tedco and Abbott’s Candies, and meet with officials from the school district, the library and the police and fire departments.

Keifer has worked on the project for many years. He also recruited the police chief, the fire chief, the tourism leader, schools superintendent and many other town leaders in Hagerstown, Md., to sign on to the project. The proclamation was approved on Oct. 1, 2013. Keifer earlier had made contact with Warner about his sister-city idea and it struck a chord. “There’s all this history there and here,” Warner said. “I hope we can continue this for a long time.” Keifer, a retiree from the security industry, started the effort when he discovered how unique the Hagerstown connection was. “To my surprise, there are only two of them,” he said. “Then I came to find out that folks that settled there came from here and that really got me going.” He has been a driving force, Longbons said: “He has taken this very seriously,” Longbons said. “This is his passion.”

The towns share a passion for excellence and rebirth, Longbons said, noting that the Maryland town has revitalized its downtown area. “They had a downtown just like ours,” he said. “They struggled, but worked very diligently to bring activities back. They have an arts and entertainment district. When they see lots of people there, businesses follow.” Hagerstown, Ind., has a similar focus on a smaller scale — of course — with a population of 1,769 compared to just over 40,000.

“It’s an amazing to discover you have excellent things, unique things, to offer as well,” Longbons said. “We take some of those things for granted and probably shouldn’t.” He thinks the Indiana town will get the better part of the bargain. “One thing they have more of is employees that can help develop (the town) through tourism and activities that bring people in,” he said. “The can show us how to do it.” And how to get started, Warner said: “They have 20 special weekends of activities throughout the year,” he said. “They know how to bring them (people) downtown.” Ironically, Longbons and Warner say, high-school students from here often have stopped in Hagerstown, Md., while making trips to Washington, D.C. Warner remembers when Hagerstown schoolchildren wrote each other as pen pals.

What does that sister-city connection mean? “We can bring their experiences (here),” Longbons explained. “Their schools can connect with ours.” The libraries, too. The leader in Hagerstown, Md., has reached out to work already with Ruth Frasur, the director of the library here. Firefighters traveled to Hagerstown, Md., to do some training. “There’s a lot of interaction already,” Warner said. And that should grow. “As people start to correspond back and forth and it gains strength, who knows where it will go,” Keifer said. “We can bring our creative energies together.” 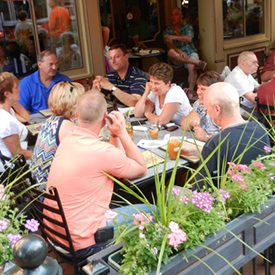