About half of the population of Jefferson Township lives in the Hagerstown area. Jefferson Township has some of the best farming ground in Wayne County and there are still a few homestead farms which have remained in the families of early settlers. However there are many new homes being built outside of the town limits as farm lands are being divided for housing. Historically Hagerstown was best known for Perfect Circle, Welliver’s Smorgasbord, the Nettle Creek Players and Abbott’s Candy. Of these only Abbott’s Candy survives. However, several new shops and restaurants have opened downtown in the past few years as well as some new industries in the immediate area. Hagerstown was recently able to attain the honor of receiving Main Street status, a very prestigious designation.

The Nettle Creek School Corporation serves the educational needs of the town and its immediate area. The corporation consists of one elementary school and a junior senior high school. There is also an athletic complex near the elementary school and a school- run cattle operation north of the high school. It is governed by seven elected school board members and guided by a superintendent and principals at each of the schools

A highly regarded library offers it patrons many things other than books. Digital media, computing stations, story hours, and community events are just some of the things available to anyone with a library card. 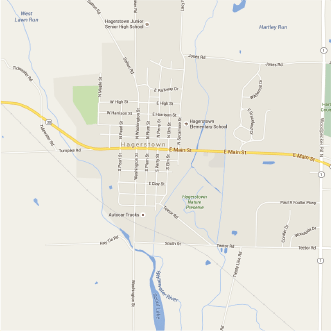