Hagerstown Town Council President Peggy Cenova has lived in this area virtually all of her life, and there’s no place she’d rather be. She spent her childhood in Greens Fork, and he and her husband Chris, have lived in Hagerstown for 26 years, raising a daughter and becoming deeply involved in the community.

At age 56, she’s serving her third term as a member of the Town Council, her first as its president — and she has high praise for her fellow council members and the townspeople in general.

“By and large, the people who live here are proud to live here,” Cenova says. “To them, Hagerstown isn’t just a place to live. To them — and to me — Hagerstown is home. We care about this place and we want to make it even better.”

For Cenova and her colleagues in local government, one key to a better Hagerstown is reflected in the ongoing effort to establish an environmentally friendly industrial and office complex in town — a LEED-certified “eco park.”

A LEED-certified facility is one that meets the standards of the Leadership in Energy and Environmental Design rating system developed in 1998 by the U.S. Green Building Council. Those standards rate building performance in five categories of sustainability: site, materials and resources, energy and atmosphere, water-use efficiency and overall indoor environmental quality.

Cenova knows the value of such a facility. She works in the Richmond satellite office of the Indiana Small Business Development Center, offering advice and assistance to entrepreneurs and small-business owners in a five-county area that includes Wayne County. She hears virtually every day from entrepreneurs who are hungry for ways to establish and operate “green” businesses — and she and other business-development experts are confident that Hagerstown can offer a place for such firms to grow.

The council first embraced the eco park project nearly two years ago, committing some of its own development funds and partnering with the Economic Development Corporation of Wayne County to explore the concept. The first step was to identify and hire an engineering firm to determine the best site for such a park. That firm — Portland, Oregon-based Group Mackenzie — is now on the job, and Cenova says its experts are looking closely at “three or four” potential sites. Town officials hope to have a site chosen by early next year.

The ultimate vision is for the park to be a privately developed and owned site on a lot of between 100 and 120 acres — large enough to accommodate six to eight small to medium-sized businesses.

Town officials had hoped to move more quickly on the project, Cenova admits, pointing out that the original plan was to have the park built and occupied by at least one tenant by the spring of 2010.

“Of course, we came up with that plan before the economy tanked,” Cenova quipped. Still, she insists that the plan, though delayed, is not derailed — and she says that town officials are using this time to sow the seeds for the park’s success by taking as many “small steps” toward sustainability as possible.

“There are lots of little things we’re trying to do now to try to change attitudes and to lay the groundwork,” she says. For example, she says, officials are reassessing energy use by the town itself, including a close examination of the operations at Town Hall. She says the town also is considering the purchase of more environmentally friendly trucks and other equipment.

Though she and her colleagues are not able to move quickly with development of the eco park right now, “we can still take the initiative and set an example,” Cenova says. “We want to lead the community in a thoughtful process.”

By “walking the walk” when it comes to environmental sustainability, she explains, town officials hope to generate enthusiasm, not just for the potential economic benefits that the eco park can bring, but for the long-term, quality-of-life issues it represents.

“We have such a rich heritage here in Hagerstown, and that’s a great platform to build on,” Cenova says. “But we don’t just want to rest on our grand past; we want to create a grand future.” 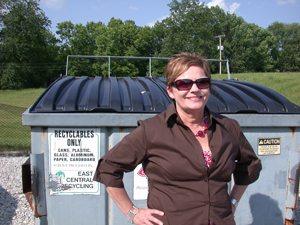