We discovered a lot about ourselves when Willie & Red’s – and a whole section of our historic downtown – faced destruction on June 23.

We discovered that we have caring citizens and neighbors.

We discovered that we have an exceptional volunteer fire department and extraordinary disaster preparedness.

We discovered an unshakeable passion for our past, our present and our future.

Neither could the next-door Hagerstown Museum and Arts Place.

“It’s history. It’s Hagerstown,” said Penny Wickes, who along with her husband, Mike, had once already poured their hearts, their hands and hundreds of thousands of dollars into saving the former Welliver’s Smorgasbord.

“We did it to help the community and that’s why we are doing it again.”

Willie & Reds already is doing a steady business in catering through its smorgasbord kitchen as it recovers,

The aim is to have some trial-run events by late October and the restaurant to be fully functioning before Thanksgiving.

Those are amazing happenings considering the fears and tears of that fateful June day, when a fire started about 3:30 p.m. as the staff was preparing to open for a normal Saturday night.

Customers already were milling around outside. Penny Wickes was getting ready at home. Fire chief Rick Cole was just returning from an ambulance run.

“I was just sitting down (when the call came in),” he said.

It had already been so dry that he thought the fire department would be going on a grass run. “I never thought in million years that it would be the biggest fire in Hagerstown history,” Cole said.

But, it was. Word spread nearly as quickly as the flames and black smoke.

Penny Wickes and hundreds of bystanders rushed to the site in horror.

“Our history was burning before our eyes,” said Tammy Moyer, a waitress at Nancy’s Main Diner.

Wickes remembers a constant stream of neighbors and customers hugging her and offering encouraging words while the flames and thick, heavy smoke rose for hours on that otherwise perfect afternoon.

“We’re here for you,” they told Wickes time and again.

“We’re here for you,” the town’s citizens said to each other in words and actions that day.

“We’re hear for you,” everyone has said in the two months that have followed.

The community support has kept the Wickes going as they’ve worked night and day there and at their other extensive business projects.

“That means a lot,” she said. “It’s been crazy the last couple years. We are worn out, but we won’t rest until we get it back.”

New trusses signal from the outside that the rebuilding effort is well underway.

The sights and sounds of construction are noticeable on weekdays along Main Street.

Catering was very busy during the recent Jubilee Days.

Many kitchen employees are still earning a paycheck. They helped haul out burned debris, tore out floors and the ceiling and helped fix water-damaged floors, ceilings and walls. “They’ve been helping every day,” she said.

Cole said he talked with Wickes many times during the fire battle and was impressed by her concern for it spreading to other buildings and for how here employees would be affected. They all had gotten out quickly, but “now, they’d be unemployed,” Cole said.

He took a personal interest in making sure everything was done to help his downtown and the Wickes: “They took a business that was a big part of this town,” he said. “They gambled. They never asked for assistance. They did it on their own.”

The next-door Hagerstown Museum and Arts Place is getting closer each day to opening full-time again.

Hundreds of bystanders and thousands from miles around only could imagine the worst as they watched the smoke rise high in the sky.

“I thought several times: ‘This is gone,” said Cole.

It was so frustrating to fight at first. “We had to wait for the utility crew so it started to take off before we could really get at it,” Cole said. “It had a good head start on us before we could make an aggressive attack.”

Wickes said she thought, too, that everything could be gone as she witnessed the heroic work being done. “I was so impressed with what they did,” she said about the firefighters. “They were out there fighting and giving encouragement.”

Business owners delivered food and drinks. Another brought in backhoes.

Another brought a battery charger to help pump water.

“That’s part of what makes this community unique,” said Cole, who also serves as president of the town council.

Unbeknownst to most bystanders, the fire was contained for the most part in the upper levels of the buildings. Rubber roofing caused the heavy, black smoke that made the fire look even worse.

“The old timber and old roofing kept it going for a while,” Cole said.

That smoke could be seen as far away as the Knightstown exit along Interstate 70.

Wickes was shocked when a fireman friend, who is a longtime restaurant customer, came out of the smoldering building and told her: “It’s not as bad as you think. We’ll get you back in there.”

Wickes remembers thinking: “You’re kidding. I expected it was all burned out inside.”

Her resolve to rebuild for the second time was cemented at that moment.

So many things combined to save the downtown face of Hagerstown that day, a place that always has delivered far more than a great meal.

It’s a meeting place for Wayne County and a destination point for the region.

It’s the backbone of a community.

Most people agree that the response to the fire was extraordinary.

Much of that credit goes to teamwork, and a unique response plan, among surrounding fire departments.

“We train together,” Cole said.

“When it comes to situations like that, we all come together to protect the citizens.”

An association of Wayne County fire departments was started so we could all work together when needed. “This was the biggest,” Cole said.

Because of the arrangement, any structure fire automatically sends out three departments. Previously, Hagerstown had to make requests through dispatch for every need.

The Hagerstown volunteer department and the arrangement are considered to be so strong that citizens have a benefit that they don’t see: Their homeowner insurance rates are cheaper because of better ISO rating.

The fire departments from Greens Fork, Economy and Cambridge City arrived first at the June fire.

It was essential to get quick help from Cambridge City, which is 7 miles away. “Their ladder truck was a big help,” Cole said.

“We could get over the fire.”

Many people credit Cole for leading the fire effort: “Those decisions he made were amazing,” said Moyer. “The day of the fire, I thought we would lose the whole block. He helped save us.”

Wickes said she sat and watched as Cole directed the effort. “He was very good,” she said. “I told him, ‘You saved the museum. You kept the whole block from burning.'”

Cole deflects the credit: “It was a team effort of every firefighter on the scene that day,” he said.

No matter what, Wickes and Cole think that Hagerstown will be stronger because of the experience.

“I think when we open back up, it will be bigger and better,” Wickes said. “I hope it will bring new life to Hagerstown.”

Cole agrees: “It could be a blessing in disguise with many good things to come from it,” he said. “We can feed off that, redefine ourselves. I think it strengthened us.” 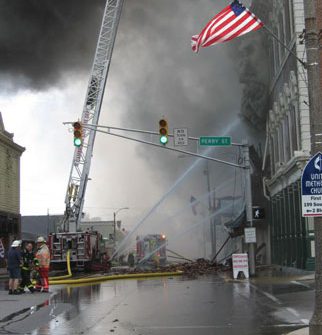