Hagerstown is on the move. A favorite cafe and a long-standing pharmacy move down a block. A charming inn makes its debut. A friendly couple takes charge of a famous candy factory. And a gun shop opens up on the outskirts of town. Yes, our town is on the move and we have the inside scoop.

The Cafe 51 and The Walnut Inn

Change is a good thing, indeed, for The Cafe 51 and The Walnut Inn owner and manger, Wes Rayburn.

The cafe opened up in October 2010 and was located on Main Street inside Across the Street Antiques. This past May, Rayburn moved the cafe into an 1850s two-story house on the corner of Walnut and Plum Street, just a block down from the original. “We like the homey atmosphere. It’s a lot brighter,” says Rayburn who has been in the food service more than 20 years.

There is more dining area for customers to enjoy, including outdoor seating and private dining rooms that are available for meetings.

The new location offers more opportunities, including an expansion for a country style inn.

The Walnut Inn has two guest rooms. Both are beautifully decorated with four-poster beds and antique furniture. “The Green Room,” a two-room suite, features a full bath while the other, “The Rose Room” shares a bathroom. Rayburn stresses that the inn is nothing flashy or showy. The guests, though, see the beauty and charm in the rustic wide-board floors, windows, and woodwork that takes them back in time. The Walnut Inn will not be a traditional bed and breakfast, but will be a clean and comfortable country inn that will offer some continental breakfast items for guests.

Not only is the cafe and inn appealing to hungry residents or out-of-towners looking for a nice place to stay, but is also an antique and gift shop. “Everything in the house is actually for sale,” says Rayburn. “All the furnishing, decor… If it doesn’t have a price tag, they can ask!”

The future looks bright for Rayburn and his endeavors. There has been an increase in business since the very first day nearly two years ago. The cafe has added more business hours, including evenings and weekends, and catering is available. If you are in the mood for a Reuben or a BBQ chicken sandwich grilled to perfection on homemade bread, a warm bowl of soup, or sinful desserts, you really ought to pay a visit to Wes and his staff at Cafe 51.

Those who call Hagerstown home are unable to recall a time before Abbott’s Candy. The family-owned business has flourished for over a century, and has recently been turned over to proud, new owners, Jay and Lynn Noel. The couple from New Palestine, Indiana are no strangers to the Abbott business. The Noels have run and operated Abbott’s Also Candy Shops in the Indianapolis area for 19 years. They opened their first location on the north side of Indianapolis in the Clearwater Crossing Shopping Plaza in 1993 and then a second location on the south side near the Greenwood Park Mall.

Lynn is a native to the Indy area and a Purdue graduate who owns an educational consulting firm based in New Palestine. Jay was born and raised near Youngstown, Ohio, then went on to attend The Culinary Institute of America in Hyde Park, New York. He graduated in 1974 and later became a sales representative for JP Foodservice (now U.S. Foodservice) where he sold sugar and paper goods to the Abbott’s candy factory.

Previous owners, Suanna Abbott Goodnight and Gordon Goodnight took over the business in 1988 after the death of Rhea Abbott, daughter-in-law to Abbott’s founder, Will Abbott.

The Noels feel that it is important to continue the Abbott’s name. “We didn’t want to see the name go away. There’s so many small companies nowadays that don’t make it. Once they’re gone, they’re gone,” says Jay. “Since they’ve been open for 100 years, we thought we should continue to keep it going. I don’t think a lot of people understand the magnitude of how long they’ve been here and what they do with the product.”

The Noels say that changes are underway, but they will continue to offer the same products, in addition to truffles from Birnn Chocolates of Vermont and 20 different varieties of sugar-free chocolates that are currently available in the Indianapolis shops. The new owners say they will be hands on and that one of the two will always be present. They want to be a face people see around.

Grandview Pharmacy will be moving into the Jefferson Township Trustee’s office on Main Street in October.

The town’s pharmacy is heading down the street after sixty-three years. Though the pharmacy is moving just a couple buildings over, it’s still a big change to those who have always remembered the drugstore on 25 W. Main St.

Grandview Pharmacy will be moving into the current Jefferson Township Trustee’s office on 47 E. Main St. across from Willie and Red’s and next to The Meeting Place. The move is scheduled to happen this October.

Hagerstown has been the home to many drugstores throughout its history, the first being opened by Enrich Taylor and Mr. Schiebler in 1838, just six years after the founding of the town. In 1941, Melvin Bennett moved to town and took over the management of The Hagerstown Drug Store that was previously managed by Walter Falck. After selling the drugstore to Doc Mays, Bennett bought the Telephone Building in 1949 where he opened up Bennett’s Pharmacy. In those early days, the pharmacy was not just a place to pick up prescriptions, toiletries, and film, but was also a fun hangout that featured a soda fountain.

In 2005, Melvin’s son and daughter-in-law, Fred and Jayne Bennett sold the two-story building to Hagerstown native, Nate Logston. The top floor of the building has served as the home to Logston’s architectural practice, Level-Three, Inc. Logston decided to sell the building this summer after hearing about the pharmacy’s plans to relocate.

Dave Bushman, the current pharmacist, says that the pharmacy’s new location will offer more off-street parking. The pharmacy will offer the same prescription service and products as they currently do. “They [customers] can still expect the same outstanding service and we’ll do the best we can to serve everyone in the area,” says Bushman.

Hagerstown is the home to many small businesses, but these businesses are by no means small in size. That’s especially the case with Big Daddy’s Guns and More. Big Daddy’s is owned and operated by Hagerstown High School graduate, Brent Meadows. The 4200-square-foot gun shop is on Highway 1, just south of State Road 38 in what was previously the home of Livingston Systems Manufacturing Plant.

“Since I was 21, I have dabbled in and out of the hobby of gun shops,” says Meadows. Big Daddy’s is his fourth gun shop.

Before Big Daddy’s, Meadows owned a gun shop downtown on the first floor of the museum, where the license branch once was. The shop closed in September 2010, after which he took a short break from the business. Alongside his gun shop ventures Meadows owns the public safety consulting company, Meadows Consulting.

Big Daddy’s is a class 3 dealer of firearms with NRA certified instructors and offers a Utah Non-Resident Concealed Firearms Permit course. This course is for those 21 years of age and older to legally carry a concealed firearm in 33 states. Indiana residents must still possess an Indiana handgun license. Big Daddy’s has five to six people on staff, including Meadows’ daughter, Alexandra, who is also a full-time college student.

Big Daddy’s showroom has 500 to 700 new and used guns in stock, which include shotguns, revolvers, pistols, and assault rifles. They also carry crossbows, ammunition, shooting supplies, and targets. There are gunsmiths on site, and the building includes a machine shop in the back half used to manufacture gun parts.

Big Daddy’s does not only appeal to Hagerstown residents. Meadows says the business is reaching people in Delaware, Henry, Randolph, Fayette and Union counties as well. “We’re even drawing people from Ohio and Kentucky pretty steadily,” he says.

“The town of Hagerstown has been very supportive of me,” says Meadows, who is thrilled about the future of Big Daddy’s. The shop will offer hydrographic printing, or water transfer imaging, in December of this year. They are also going to build a 100-yard indoor gun range, opening in April of 2013, where customers can rent and shoot guns. Big Daddy’s will also offer basic pistol, rifle, shotgun, and self-defense lessons once the range is open. Meadows says there will be about 15 classes offered, and each class could take a couple of hours up to one to two days. 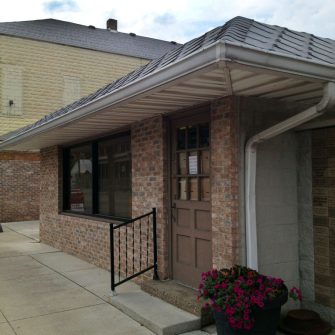