HAGERSTOWN, Ind. — IronGate Creative has a stately, leisurely appearance from the outside. But, there’s a beehive of business activitity going on inside.

Award plaques and a huge conferencing table attest further to the company’s success with advertising, marketing and product branding.

Its success in Hagerstown is a testament to a shared vision and community resources.

Co-founder Jeff Huffine says a loan for $30,000 through Hagerstown’s economic development fund was essential in the final decision to locate the business at 35 W. Main St., within steps of an old-fashioned pharmacy, a pizza parlor and the post office.

He and business partner Jeff Richards had started their business in Hagerstown, but were considering other location options about seven years ago.

Many people scoffed at the potential of the rundown old residence, Huffine says.

It had a colorful history, including serving as home for the Exponent newspaper.

Besides stories that were produced in the building, there were persistent sightings of a friendly ghost.

Those all heightened its appeal, gave it artistic character, Huffine jokes.

The choice for Huffine and Richards was about vision and branding, about picking hometown and character over a potential relocation.

It also was about taking a risk.”Jeff and I joke that we’re not smart enough to be scared….. so we proceeded on with our plans,” Richards says.

The two received a loan from First Bank Richmond to buy the building and make initial renovations.

Hagerstown official Nick Jarrett helped steer them through the EDIT process that resulted in a $30,000 loan at 1.5 percent interest.

“The Town of Hagerstown made a good EDIT Fund investment by making this low-interest loan to this business.” Says Peggy Cenova, President of the Hagerstown Town Council. “Not only did they preserve a historical building on our Main Street – but they have added professional employees to their payroll. This business is a perfect example of retaining the kind of well-paid jobs that we need to grow to a prosperous future.”

“The loan was just what we needed,” Huffine says. 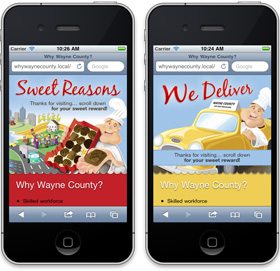