It’s that time of year again. Natives and visitors of Hagerstown are gearing up for yet another weekend of Jubilee Days festivities. The Nettle Creek Lions Club will host this celebration August 16-18.

The festivities will kick off on Thursday evening with the Hagerstown Rotary’s gyroscope contest and the Sight Queen Ice Cream Social. On Friday, the Festival Market will return with crafts, food and games, along with the Classic Car show and musical entertainment. The tradition will continue with the Jubilee Day parade on Saturday morning with an estimated 1,500 people in attendance.

The remainder of the fun-filled weekend will be packed with fun activities to celebrate the community, including the return of the Lions Club Fish Fry, a talent show, the Kid’s Zone, the Grand Prix Go-Kart Race, and Dale’s Pizza/Wannabeez’ Band Bash, which will feature live music from local musicians.

The Grand Prix has been a big hit and continues to grow. This will be the third year that the Southern Indiana Racing Association comes to town. The racers always look forward to returning, says Robin Nugent of the Lions Club. In previous years, the race has coincided and competed with another race nearby. Because there is no conflict this year, Nugent believes there will be more karts and ultimately more spectators. She hopes that this will result in a bigger turnout from the community.

Another highlight of the weekend will be the crowning of the 60th Jubilee Days Sight Queen. The Lions Club contest honors local young women and raises money to aid the Hagerstown community. The Lions Club assists those in need of eye care and donates to food banks, the high school band, sports teams, and FFA. They also adopt several families and provide gifts during the holiday season. The Sight Queen contestants help raise this money by door-to-door campaigning, car washes, and bake sales, among other various fundraisers. Contestants this year are Abby Bridgford, Cassi Federico, Desiree McNew, and Zoey Scarrette. Logan Ritter was crowned last year’s Sight Queen.

Hagerstown has celebrated and looked forward to the third weekend in August for more than 60 years. Everyone comes together and takes pride in the neighborhood and small-town living. “It is one day a year that brings everyone out for the positives,” says Nugent.

The Jubilee weekend is not just for those currently living in the area, but for those who grew up in and graduated from Hagerstown as well. “It’s a homecoming for the town,” says Becky Reed, Lions Club President. Most of the Hagerstown High School class reunions are held during this weekend and many of these classes organize floats that ride in the parade. It’s a fun weekend that brings old classmates and friends together. “This is one day that the streets are lined and old friends reunite and new friends are made,” says Nugent.

Kyle and Lori Cross, owners of Dale’s Pizza and Wannabeez Bar, are also doing their best in making sure the weekend is even more enjoyable for the community. The goal of involving music and entertainment into the town’s celebration has become a nearly all-day event called Band Bash, which originated last year. “Band Bash is my attempt as a musician, and someone who grew up in this town, to bring live music and something more to Jubilee Days,” says Kyle Cross.

The town council approved closing the Dale’s/Wannabeez section of Washington Street from noon until midnight for the occasion. Cross explained that this year’s Band Bash is more of a community event. Families and those under 21 can bring lawn chairs, sit back, and enjoy the entertainment. Band Boosters will be sponsoring Kid Zone’s bounce house and selling snow cones in the parking lot of Chris Mull Homes, across from Dale’s/Wannabeez parking lot where the stage and beer garden will be held.

“Band Bash is something that people really enjoyed. We hope that it’s a tradition we’ll continue to do and hoping that other businesses will find their ‘Band Bash,” Cross says.

Click here to see who will be performing at Band Bash 2012. 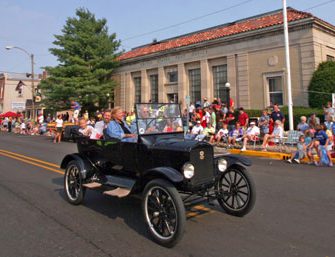