That’s the mantra of Dr. Bill Doering in his new role as superintendent of Nettle Creek Schools.

“It’s an honor to be a leader,” said the longtime educator.

“They have placed a great responsibility for me in their children and their community.

Library director Ruth Frasur also is new to her leadership position in the last year.

They all were thrilled to be selected for their new roles.

“It is an honor to be in a position that allows me to purposefully and positively impact the lives of our community members,” Frasur said.

All four new leaders were attracted to Hagerstown because the community has a reputation for excellence and reverence; it’s a place where residents love their small-town life, yet have big-time ambitions. They all feel welcome.

“I haven’t felt like an outsider at all,” Folkner said. “I knew this was a great community.”

Keesling, who stepped down last year as head football coach at Earlham College, said he’s thrilled to work for a school system that he’s admired for many decades: “This is a special place because of the people within the school system and the greater community. Continually, I am impressed with everyone I meet on a daily basis,” he said. “I come from a small community (Winchester) and I feel right at home here.”

Doering has been impressed by Hagerstown’s academic achievements for a long time. The native of Cleveland, Ohio, was a longtime principal for Richmond Community Schools. He had long wanted to lead a school district and live in a small-town or rural environment. “I want to get a piece of property and raise horses,” he said.

He also enjoys a new hobby as a beekeeper.

His focus is on academic achievement and performance at a broad level.

“As good as we are, we can be better,” he said. “We have so many resources in place.”

Those include dedicated teachers, administrators, students and parents. “I’ve spent a lot of time meeting employees. I am very impressed,” Doering said. “The attitude is what’s catching my attention. It’s positive.”

Frasur was looking for a leadership challenge after working in Liberty for many years while earning her master’s degree. The Michigan native, a wife and mother of three boys, was impressed from the day she first came to visit.

“I decided to check Hagerstown out before ever submitting my resume, and was pleased to find both a library and a community that were warm and inviting,” she said.

“On that first day, I ended up spending nearly two hours just talking with (retired director) Linda Mettler about libraries in general, Hagerstown Library, and Hagerstown as a community.”

Frasur’s visit also coincided with the first Local Authors Day sponsored by the Friends of the Library. “I was able to meet several community members as well as Friends members,” she said. “It really was the perfect day to visit.”

Frasur enjoys problem-solving, something all of the new leaders will face in a variety of ways. “I like seeing how well things are working and finding ways to make them work better or more efficiently,” she said.

“It’s pretty exciting to be able to enrich the lives of people.”

It’s exciting for Folkner to return to east-central Indiana.

“I wanted to get back home,” said the native of Yorktown, who is the father of two grown sons. He served as a police officer for more than a decade in Muncie and most recently worked as a sergeant on the police force at the Indiana University Southeast campus in New Albany.

He also spent a year as a police-training consultant in Afghanistan.

He was looking for career advancement. “Being a police chief was a goal,” he said. “It’s been everything I imagined it could be.”

“What I love is I have time to stop and visit with people,” he said. “I get the chance to shake hands, talk about this and that and to make lasting connections.”

Folkner said his first months have been exciting — and hectic. One obvious reason was the devastating fire at Willie & Reds.

Another reason was a series of storms.

Yet, the transition was seamless because of the help of Kent Hollenberg, who retired at the end of May after serving as chief for 23 years. “He did an awesome job of preparing me,” Folkner said.

The other three new leaders also praise the help of their predecessors in preparing for their jobs.

“This spring I had the opportunity to shadow (Schraub) and I have been overly impressed with the professionalism and abilities of all the teachers and staff,” Keesling said.

Frasur moved up into the role after serving as an assistant for a year under Mettler and then interim director John MacDonald.

“I know a lot of people that don’t enjoy their jobs or have become cynical about their ability to make a difference. I’m very blessed to love my job and to have seen enough evidence of its value to remain optimistic.”

The library recently renovated its lighting and had a successful summer program, Frasur said. “As we move forward, I hope to continue to redefine the library as a community cornerstone.”

She points out libraries have historically connected people through books, but they are evolving at a fast pace. “We hope to create an environment through our facilities, collections, services and programs that fosters the development and communication of information,” she said.

“We also want to take our services outside of the library walls and be more visible as an active participant in local culture.”

All four new leaders share another common ambition: They plan to stick around in their roles for a long time.

“My goal is that this is my last job,” Folkner said. “I don’t plan on going anywhere else.” 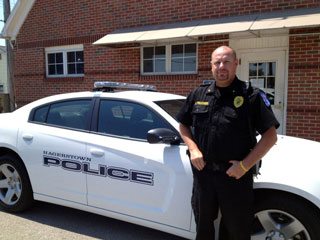