Mike Keifer has some amazing observations to take back to Maryland after an action-packed visit to the only other Hagerstown in the United States.

He certainly can tell how he was impressed by eating at the iconic Willie & Reds and how he was warmly greeted by hundreds of new brothers and sisters.

He can tell about how he toured the famous Tedco Toys plant, tasted treats from Abbott’s Candies and learned about the town’s Teetor-automotive history.

He can tell an amazing story how the area’s Amish joined thousands of others in taking part in Jubilee Days and how the Nettle Creek School District is ready to coordinate on educational initiatives.

“Everything has been wonderful about my visit,” Keifer said Saturday afternoon during a quiet moment. “It’s just been amazing.”

The most amazing story he’ll tell those back home in Maryland, though, is how the future is so bright for the Hagerstowns as sister cities. There are historic similarities and multiple ways they can work together and help each other.

There’s a long time of catching up from a connection that was just waiting for a pioneer like Kiefer to spark the initiative and then carry it through.

“It should have taken place a long time ago,” said Phyllis Mattheis about the sister-city relationship.

She helped shepherd Keifer on a historic tour of Hagerstown and the area during his four-day visit. Mattheis has visited Hagerstown, Md., along with her husband, Jerry.

She noted that the sister cities have a lot in common historically, including a canal. Both also share a close connection to the Old National Road and to auto racing.

The connection was formalized during a simple and poignant ceremony Saturday in the park across from City Hall and the library.

“We’re officially sister cities and we’re excited about that,” said councilman Brian Longbons, who was there on Oct. 1, 2013 when Hagerstown, Md., approved its half of the designation.

Former city manager Bob Warner was there last October, too, along with their spouses and they all were amazed at the interest from people in the Maryland city of 40,000 for connecting with their little sister in Indiana, population 1,769.

It was pointed out — as the Hagerstown, Md., flag flew in front of City Hall — that pioneers from there came west in the early 1800s and helped found Hagerstown, Ind. There certainly are blood relations already in the two towns.

The official sister-city proclamation was read by Rick Cole, president of the Hagerstown Town Council.

Immediately afterward, there was a gift exchange with Keifer, one of many made during his visit.

The retiree from Maryland founded the sister-city idea many years ago and kept pushing it toward fruition. His efforts resulted in the enlistment of dozens of Maryland public leaders in the cause. “This means a lot, for Mike to show such passion and come here,” Cole said after the event. “It will be really great for us. I am very proud.”

Keifer expressed his pride, too: “It’s an honor for me to be the ambassador, to put the ribbon on this,” he said.

He did more than put a ribbon on it during a short acceptance speech. He announced that his family would sponsor a $500 scholarship each year starting in 2016 for a graduating senior from Hagerstown High School. “I want to leave a legacy,” he said. “I want to do something special.”

He further announced that the Maryland State Senate would provide a similar scholarship for a new graduate from high school in Hagerstown, Md.

Keifer noted that Jubilee Days opened his eyes to a connection that he’d never considered, that he’ll quickly report back to Maryland.

There are many Amish families that live near Hagerstown, Md., yet are seldom seen at activities there. “Maybe we can reach out there,” Keifer said. “When we make connections, it will strengthen this.”

Butters said she expects Hagerstown, Ind., to learn a lot about tourism-related activities from the connection. For example, the sister city in Maryland has a blues festival that started with hundreds of people attending and has grown to 40,000 each year. The bigger town also has made major headway in redeveloping its downtown. “There are a lot of opportunities in it,” Butters said.

One possibility, she said, is to connect Colts fans from Indiana and Maryland. Today’s Indianapolis Colts had quickly left Baltimore in 1984. “Maybe we can bury the hatchet,” Butters said. “You know, sisters can have their differences and still love each other.” 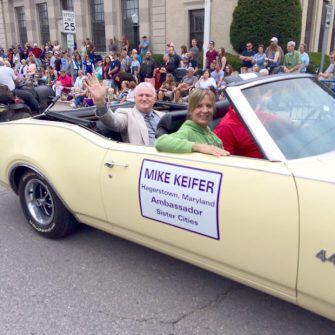